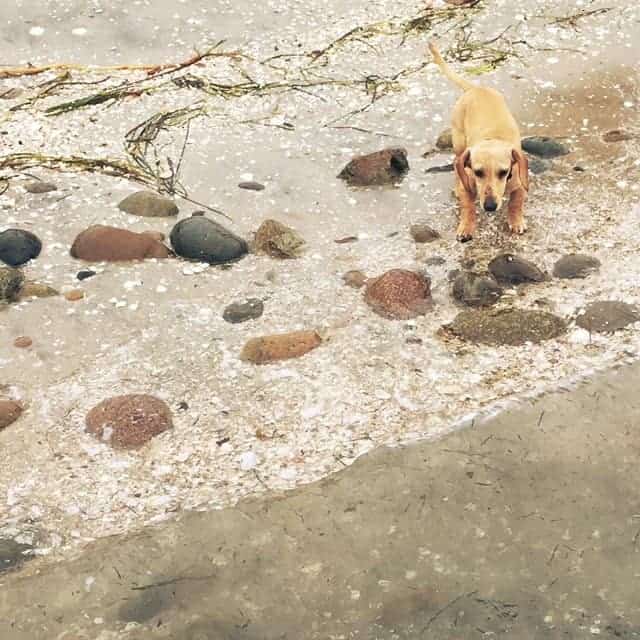 “Only when we are no longer afraid do we begin to live.” –Dorothy Thompson

Life is scary. Every day you wake up there’s a chance you might get hit with a curveball. What I’ve been learning lately, from some very unexpected sources, is that sometimes the curveballs are catchable.

1. Last weekend we took the dogs to the beach for Summer’s second ever trip. Olive was splashing around in the water while Summer looked on hesitantly. Then, out of nowhere, Summer took a flying leap into the waves and just started swimming! It took Olive many months to get the courage to go in the ocean when she was a tiny pup, but Summer clearly felt that the fun outweighed the risks. I was so shocked, and proud, and happy to see her out there enjoying herself with her sister. She’s so tiny, and the ocean is so big, and it was quite a beautiful moment to see her overcome that fear.

2. Ok, this actually happened 2 weeks ago, but since we’re on the subject of fear, and I forgot to mention it then, I’ll mention it now. Jen and the kids and I walked to the ice cream shop the other night. Carson has been terrified of Olive his entire life, but lately he’s been able to ride in the stroller while Olive walks alongside without crying. On this day, he could not have ice cream unless he stood in line with us (including Olive). He did so bravely, while constantly giving her suspicious glances over his shoulder. On the way home, Jen told the kids they could walk and didn’t have to ride in the stroller. Carson clearly wanted to walk but was scared of Olive. Watching his little brain weigh his options was so cute and funny, but also poignant. He ultimately chose to walk, constantly positioning himself on the far side of the sidewalk from Olive. As we walked, and nothing scary happened, Carson seemed to become more at ease. Eventually I started offering him the leash to “walk” her if he wanted to. After about 3 offers he finally accepted, took the end of the leash and proudly walked her for several blocks. Pending no other dogs ruin my hard work, it think Carson’s fear is legitimately behind him. That’s the thing about fear. When you face it, it goes away.

Why is it so seemingly easy for these tiny creatures to face their fears, and it’s so difficult for so many adults? When I’m scared of something I become paralyzed for as long as I can. I hold on to the fear, and “what if” myself into oblivion instead of just facing it and moving on. I’m very grateful to have been shown these lessons by these babies, especially at this exact moment in my life.

3. Lastly, and having nothing to do with fear, but something that made me smile this week, was shooting a commercial with two adorable little boys at work. Spending a good chunk of my morning coloring, eating crackers, and trying to get them to sit still and be quiet was not a bad way to spend a work day. We had a lot of fun together, and I was reminded why I took this position to begin with.

Hooray for the weekend! I’ve got a million and one things going on, but my head is starting to clear from the funk I’ve been in lately so I’m hoping to power through without any hiccups or meltdowns. I hope you all can find something enjoyable in your weekend as well.