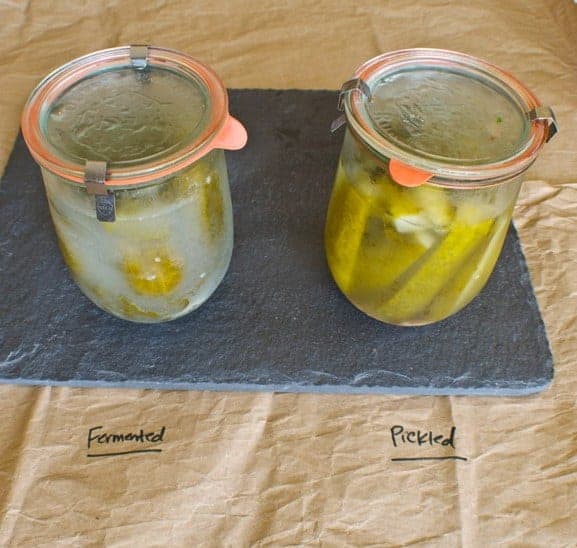 As many people do this time of year, I’ve been canning up a storm in order to store all the currently available fresh produce for the winter. Ok, I’m lying. These pickles will be gone by October for sure (bloody mary anyone?) In reality,  I just like to experiment in my kitchen with things I’ve never done before. Last year I dove into the realm of pickle making with great success. I pickled cucumbers, green beans, okra, and jalapenos. We had amazing bloody mary’s for months! (can you tell I love a bloody mary?) This year, I learned of fermented pickles after attending a blogger event hosted by Jenny of Vintage Sugar Cube. Austin from the San Diego Fermenters Club did a demonstration on how to make fermented pickles. In all honesty, I never heard of fermented pickles before. After tasting one, I knew I had to try it at home. 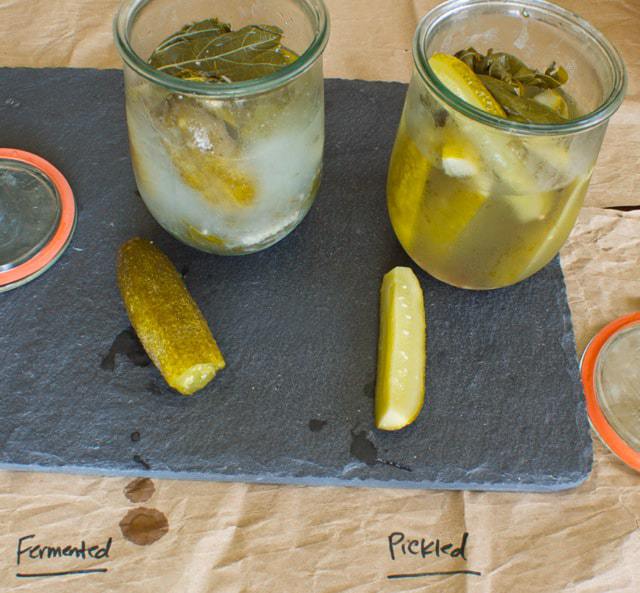 After turning my kitchen into a pickling laboratory for a day, I ended up with a batch of regular “pickled” pickles and a batch of fermented garlic pickles. To make the regular pickles, you boil vinegar, salt, and sugar, then pour the hot liquid into jars filled with cucumbers, dill, pickling spice and whatever other seasonings you choose. You can then “can” these by processing them in a boiling water bath, but I just stuck mine straight in the fridge because I knew I’d be eating them sooner than later. These were ready in 24 hours.  For the fermented pickles, I filled a jar with cucumbers, dill, garlic, and a grape leaf (to keep ’em crunchy) then covered the contents with a brine made up of  2tsp salt for every 1 cup of water. I weighed down the contents with a measuring cup, wrapped it in a towel to keep the bugs out, then sat it on my counter for a week. Every couple of days I scraped the mold off the top (gross I know, but perfectly safe) and by day 7, I had delicious, garlicky pickles that I then moved to the fridge. 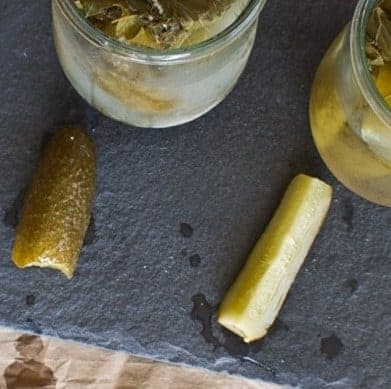 Survey says….. I think I’ll be switching exclusively to fermented pickles from now on unless i’m canning for gifts. This experiment has definitely converted me!  Anyone else want to weigh in on this? Which type of pickles do you prefer?

To learn how to make traditional pickled pickles, read THIS

To learn how to make fermented pickles, read THIS