This month’s food styling post is all about how I conceptualize and work through ideas.

I’ve been making these Instagram banners for 3 months now. Like most ideas, this one just popped into my head, but only in rough draft form.

For example, for September my idea was “do something with heirloom tomatoes”. Very nondescript, but that’s how most of my ideas start.

November started as “use Thanksgiving foods to spell out NOVEMBER”. This left a lot to be worked out, but it was a good starting point.

When it comes to ideas, I know it’s good when I can’t stop thinking about it. I’ve had many ideas throughout my life that vanish like the wind. This one stuck around.

Sometimes, not always, I do group brainstorming when it comes to working through ideas. I asked The Hubs for ideas around this concept one night over dinner. (After all, he was the genius that came up with the famous Samoa Bundt Cake) The first words out of his mouth were, “you should use a giant turkey leg as the b”.

And then the floodgates opened.

Up until that point all I had in my mind was “the v should be a slice of pie”. I was truly stumped about how I was going to incorporate turkey (such a non-regular shaped item) into this banner. 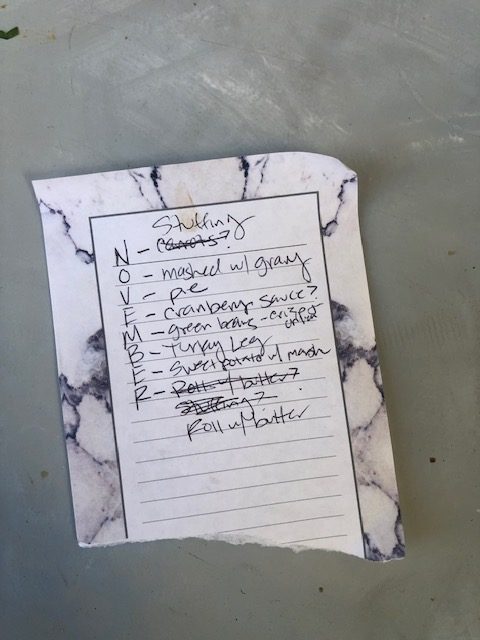 Once we had a bunch of ideas, it became about color and texture combinations. A lot of Thanksgiving food is brown, so I needed to space out my colorful items.

I also needed to think about the actual ways I would be able to manipulate the food.

Can I spell something out of gravy and have it stay in place?

Of course there were challenges you can never foresee. That’s the essence of food styling, and the reason I do these personal exercises. Somewhere down the road, someone is going to ask me to use cranberry sauce in lettering and I am going to know just what to do!

In case you were wondering, stuffing has a mind of it’s own, and although I froze my pie so it would hold it’s shape, I wasn’t fast enough and it melted several times before I finally go the shot.

Once I had the word laid out, it was time for details.

Every good execution comes down to the details in food styling or in life.

Sauce, slivered almonds and crunchy onions on the greens beans to mimic the “casserole”.

Crumbs and a pat of butter on the roll.

Herbs in the stuffing.

Toasted marshmallows on the sweet potato.

Every detail was intentional.

Final steps were refining, shooting and of course editing. I tried a few scenarios with napkins, forks etc, but none of them seemed quite right.

Sometimes you don’t know if something will work until you see it with your own eyes. Another key factor to any food styling situation is trial and error.

Overall, I’m in love with the image. Head over to my Instagram to see the final panoramic result, and stay tuned for more ideas, more food styling how to’s and more fun Instagram banners in the months to come.